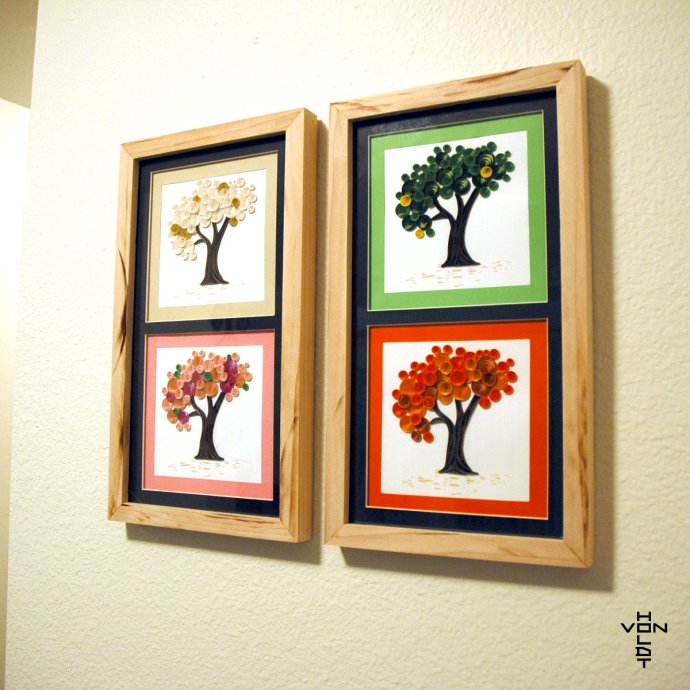 My wife picked up these four matching quilling cards of the four seasons at an art show in Iowa this summer.  We couldn’t figure out how we wanted to frame them, either as a long row or a square. In the end, my wife liked the idea of framing them as these two pairs and we could display the frames either way.  The biggest challenge was that the quilling was on the form of 5×7 cards, so I didn’t have much to work with for margins.  I tried to add a complimenting splash of color and a very thin mat inside an equally thin frame.  The wood still needs some work, but we haven’t decided on a final finish yet. 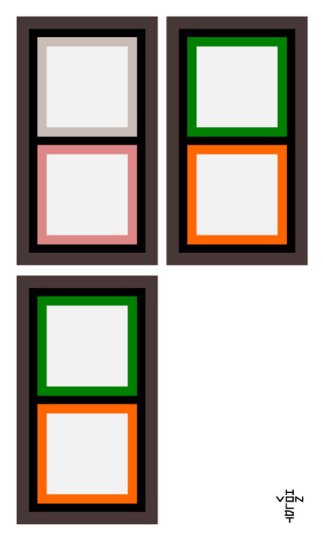 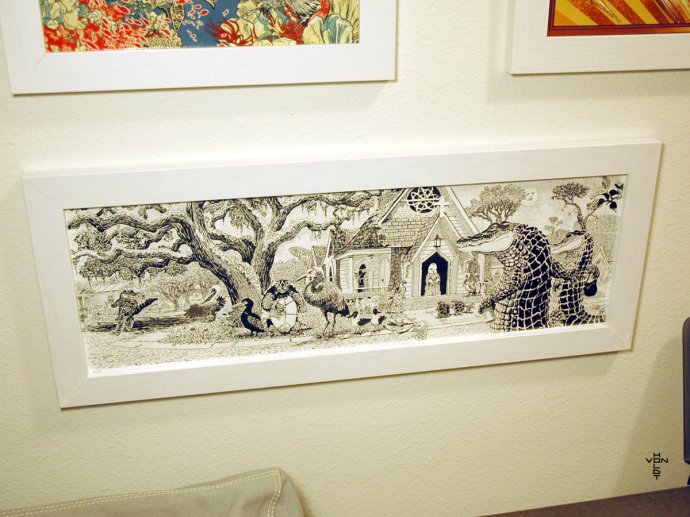 I bought this great Stig Marcussen print a few years ago in Biloxi but never got around to framing it.  I was cranking out some end of year projects so I made sure this was one of them.  The frame matches the two I have for my Mondo posters.

A few months back, we visited New Orleans while on vacation, and my youngest son bought a print from an artist named Tesfaye Negusse.  He decided on the size, design, and color for the frame I built for it.

Hello 2018!  It’s been a busy last few months, so I am way behind posting stuff here.  But I have been working on a few projects that I took some pictures of, so here’s a few rapid-fire posts to catch up.

My wife keeps finding these really cute foil window cling stickers that we’ve decided to put into floating frames and give as gifts.  First, we figure out how we want to arrange them and then I build a custom frame to that size.  Short of cleaning the glass a dozen times, that’s all there is to it.

This was a gift that honestly got finished on Christmas day for my wife.  We visited some friends for Thanksgiving on the gulf coast, and brought home a bunch of little driftwood pieces.  This will be a cute reminder around the house of that wonderful trip. 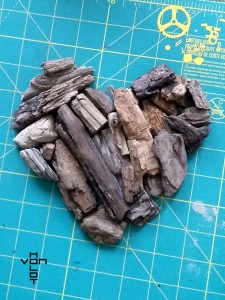 laying out a heart shape

My wife had this set of coasters she really liked but never used, so i built a frame for two of them.

This picture was after all the pieces were cut (to check the fit).  I eventually painted the inside edges black before gluing and nailing the glass and frame together.

Today I made a little 4″ frame with a quote from a family member’s Eeyore statue.  It’s funny that this little thing took a whole lot of different tools to make and caused quite the mess in the process.  Table saw, router table, miter saw, sander, clamps, glue, compressor, nail gun, glass cutter…  Turned out cute though.  Here’s a couple less tiny frames I made for Christmas this year. 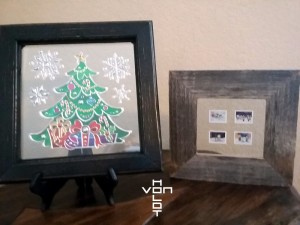 A few weeks ago I posted a map of the projection system we’re building for our new church auditorium and this last weekend I got to make a mounting frame for the array of small monitors.  It started with a sketch during service, then I meticulously planned out the build (later laid out on our booth blueprints), created a frame the disassembles easily, and built some brackets to mount the monitors to.  It’s actually completed, stained, and installed since we did our first successful service in the building today; I just forgot to take a final photo.

One interesting hiccup is that I tried to build this before I had the monitors in hand, and the initial plans were all off the product dimensions on Amazon.  After cutting the main spine of the frame to my measurements, it became readily apparent that those dimensions were not even close for 16″ monitors.  Luckily buried in the customer question someone had provided the true size and I re-did my plans to those. 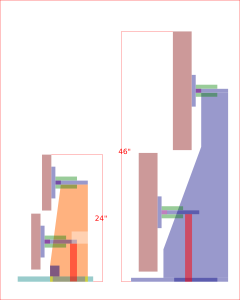 Happy Valentine’s Day!  Last year our family got these really cute little Snoopy valentine cards and my wife kept them to frame someday.  I thought that would be a nice surprise from me, so last weekend I built this deep photo frame to give them a shadow box quality.

Originally the frame wasn’t distressed, but my wife thought it would look better that way and if the cards weren’t randomly flapping open so much, so I disassembled it and made the changes this morning. 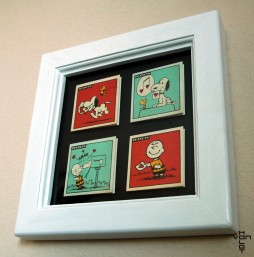 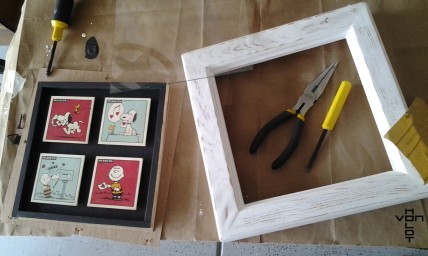 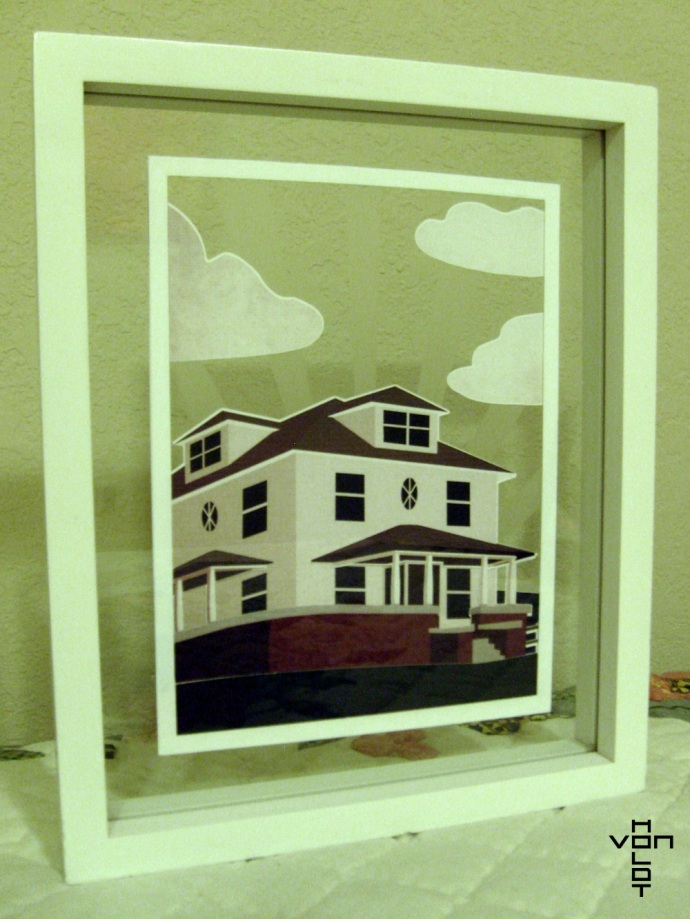 I did this farmhouse sometime back for something, and used it again for another gift we are giving.  This particular frame limited the amount of paper layers I could use, so I decided to etch some sun rays into the glass behind to house.  It’s a little hard to see in the picture though. 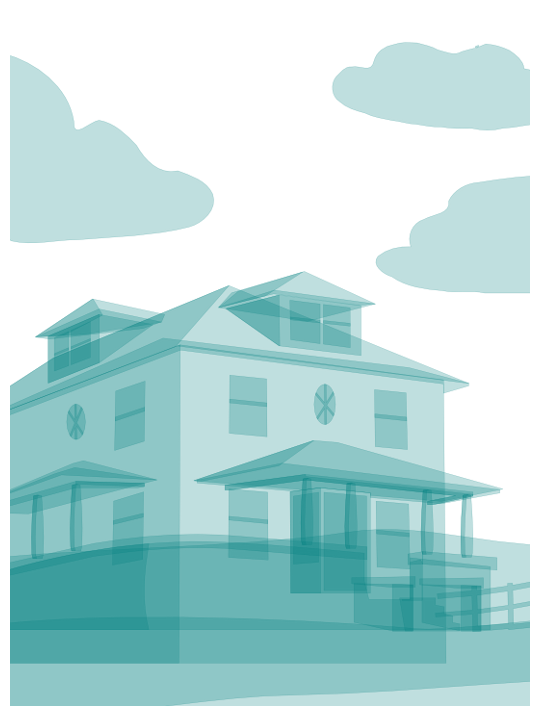 During the cutting my Cameo’s “print and cut” registration seems to have gotten a little off, which is very unsettling.  I will have to dink around with it to see what I can do to fix it.